As another early Spring semester conference, the Model United Nations at Emory (MUNE) conference was held February 6-9, 2020. Delegates from around the South and schools even further traveled to Atlanta, Georgia to participate in a long weekend of Model UN at Emory University’s campus which was headed by Secretary-General Miguel Vivar-Alcalde. According to statistics provided by the MUNE secretariat, over 195 delegates registered for the conference with 16 schools attending. The conference centered around the Emory Student Center (ESC) as the secretariat shared that they “completely changed the aesthetic of the conference to move towards a more modern feel that was reflective of [their] growth and professionalism.”

MUNE VIII’s Secretary-General provided the following quote, “It was an incredibly rewarding experience to organize MUNE. It was so fulfilling to see the hard work pay off with such great reviews in Head Delegate feedback sessions from participating schools. It goes without saying that the Crisis Directors drove this memorable experience for delegates and that alongside the careful and meticulous planning of Secretariat made this a successful conference and one that I’m looking forward to seeing evolve in the future.”

The 16 attending delegations came from the following schools:

MUNE VIII offered 12 unique committees for delegates to choose from. 10 of those were full crisis committees, including an ad-hoc, a 24 hour committee, and two sides of a JCC. One committee was full General Assembly style. The last committee was the UN Security Council with intermittent emergency updates.

This year’s Ad-Hoc topic revolved around the Harry Potter universe and took place during the Triwizard Tournament.

As it should always be said, the committee comments section should serve as a balanced critique of the conference. MUN01 recognizes the hardwork and dedication that all Secretariat members put into the weekend. However, MUN01 also believes that delegates should be able to receive honest opinions and conferences gain feedback to grow and improve every year!

Overall, there were very few critiques for the conference. One critique from a delegate was that they felt high ranking teams were given the best positions in the room, like the P5 in the UN Security Council committee.

MUNE VIII provided two socials for delegates and staff to get to know each other, their committee members, and their own teams. One social was for head delegates specifically and took place on Friday, February 7th. This social was at Tin Lizzy’s Cantina and offered head delegates the opportunity to meet the Secretariat in a laid back setting with a spread of Mexican food provided. The second social, dubbed “Delfest,” was at The Pool Hall, a bar in a nightlife strip of Atlanta. This social event took place the following night, on Saturday, February 8th. Delegates enjoyed the music and mingling the social provided from 10pm until 1am. Many delegates commented on how much they enjoyed both socials!

On Sunday, February 9th, the conference came to a close with the awards ceremony. After the award winners were quickly announced, delegates enjoyed watching a chair and the Secretary-General get pied as well as a “Best Crisis Update” voting competition. 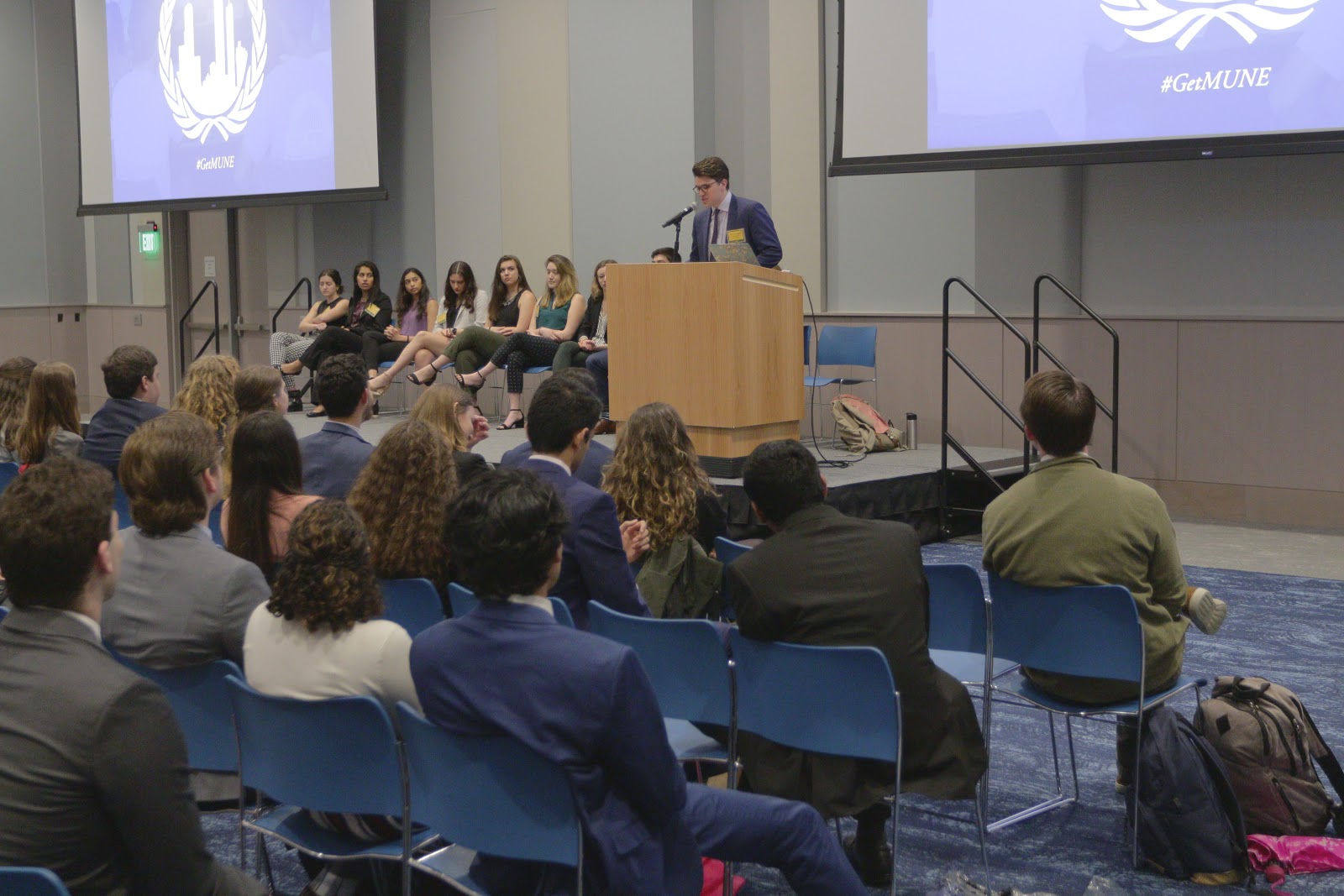 To learn more about MUNE VIII, click here to see their conference website. This conference was also recapped on Episode #43 of the podcast. Click here to listen or go to Apple Podcasts or Spotify. Thank you to the teams and delegates who participated in building this article with their comments and critiques. MUN01 would also like to thank the MUNE Secretariat for providing a number of stats to this article as well as photos and quotes. Congrats to all who competed in or staffed the conference!